Sam is one of the first of a new generation of Napa Valley winemakers. Sam's father, Phil Baxter, created some of the early wines that brought notoriety to Napa Valley. A young Sam benefited from hands-on experience at the side of his father and others. He went on to study at the University of California, Davis.  After graduating with a degree in fermentation science in 1998, Baxter took a harvest intern position at Sterling Vineyards and worked in Australia. He began with Terra Valentine as cellarmaster in July 1999 and was appointed winemaker in April 2002.

>Baxter's academic foundation places him among a new breed of high-tech winemakers. Even so, his modern approach is tempered with strong respect for tradition. 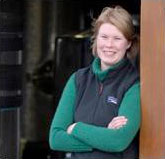 Originally from Helsinki, Finland, Outi moved to New Zealand in January 2004.  On her arrival she studied a Postgraduate Diploma in Viticulture & Oenology at Lincoln University.

She has significant experience in the international wine industry and has worked as a harvest cellar hand in France, Germany, Australia (Yarra Valley and Tasmania) and California.

As the winemaker at Julicher Estate Winery in Martinborough, Outi crafted the number one wine in New Zealand with the family winery's 2006 Pinot Noir (Champion Wine of the Show, NZ International Wine Show 2007).